She wore the separates well, but I couldn’t bring myself to like the overdose of the pearl tassels.

Instead of doing a gown, Anya went the dress route at the Big Zee Entertainment Awards wearing a cream beaded one by Cherie D. Hair worn down in a sleek do, smoky eyes and gold Aldo sandals finished out her look.

Ignoring the major Balmain vibes the dress had, she looked nice. I would’ve preferred an edgier pair of footwear though. It felt too matchey.

In Cherie D & Marks And Spencer

The only thing I’d change here would be those Dune pumps. They clashed with the gold jacket.

Another gala and we saw Ms. Kapoor in another Cherie D sari. I don’t get why Kanika was drawn to this sari because I don’t see anything unique about it. Or that style of blouse. It always feels like that the strap of the blouse was too loose and just fell off the shoulder. So much so, that I always feel like I should pull it up for her.

Anyhoo, you know how I feel about this look. What do you feel? 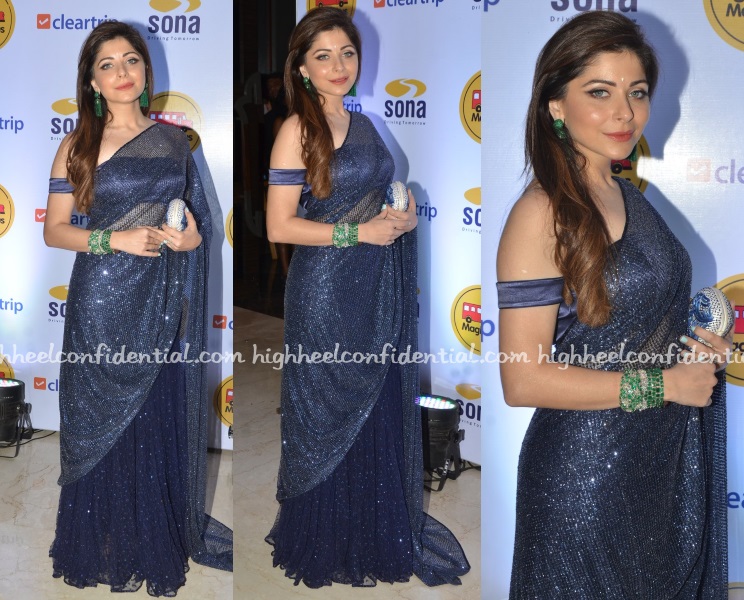 For her appearance at the charity gala held in Mumbai, Kanika picked a Cherie D lehenga. With her hair swept the side, the songstress finished out the look with a necklace from Gulecha Jewelers and a box clutch. Like the look?

Kanika Kapoor At A Charity Gala